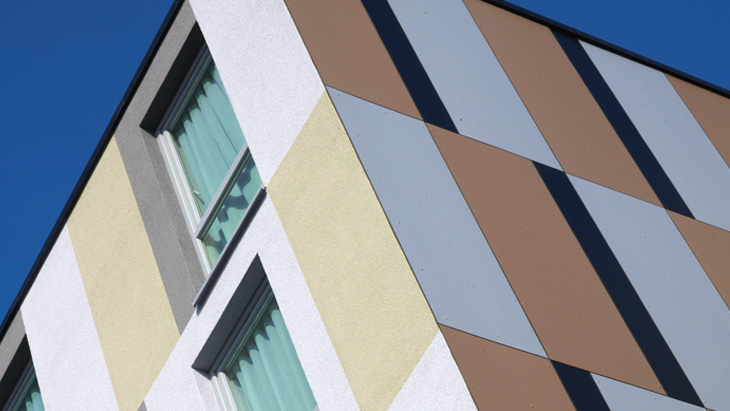 Prizeotel: a budget hotel not just for the younger generation

When you come across a hotel designed something like a music video, you could guess that a designer like Karim Rashid has had a hand in it. And you'd be right: this extrovert, internationally successful product designer is indeed the person responsible for the trendy design in the Prizeotel in Bremen, which opened in 2009. But don't worry, the budget hotel has the air of a good music clip but without the level of noise. The Hansgrohe Raindance showers really do make you want to sing in the shower.

The Prizeotel's unconventional look attracts a younger clientèle, and in 2010 an internet portal declared the budget hotel to be one of the most popular hotels in the under 30 age group. And since it is located near the train station, trade fair and event hall, the hotel also attracts cost-conscious business travellers.

Accents in pink, which is Karim Rashid's favourite colour, and light green shape the interior design in the hotel, from the lobby to the 127 guest rooms. Vibrant carpet designs run through the hallways, and the room numbers are woven into the carpeting in pink. Oval mirrors frame the flat screens, and guests will even find trendy décor in the bathrooms as well. The shower sets, which come with the Raindance E 150 Air 3jet, guarantee comfort in the showers. The hand shower, which includes three jet types, comes with a wall bar Unica 90 Set, and each element can be adjusted individually very easily. Hansgrohe's smooth, sleek design in the bathrooms perfectly complements the exciting modern design in the rest of the building.

This website uses cookies so that you can make use of all its features. Important: We will only process your data with your consent. You can permanently withdraw your consent at any time.